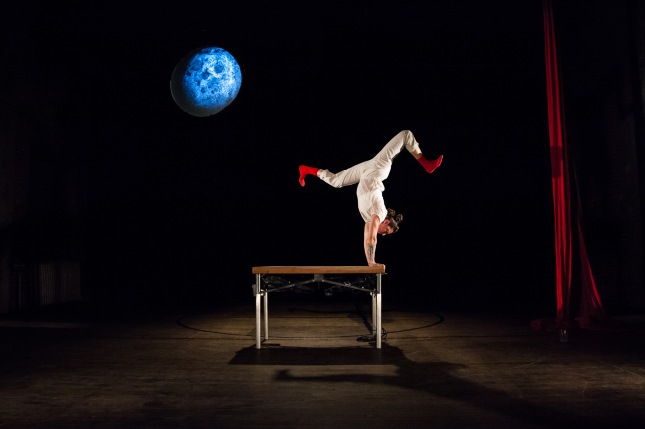 Walking into the Assembly Checkpoint in Bristo Place revealed the spectacular space where the Almanac Dance Circus Theatre was to present its show, xoxo moongirl. I was intrigued to see a trapeze hanging from the high ceiling and a red drape that cascaded from ceiling to floor. Waiting for us we could see the tall figure of a woman standing center-stage on top of a large table. This was Nicole Burgio, performing solo as herself. At the back sat award-winning composer Melanie Hsu patiently waiting for her musical cue, she would be performing today using voice, guitar and double bass.

As Nicole stood there she cast a tall shadow on the background drape. The lights went up and she turned to face us, moving slowly to the end of the table where a glass of milk was precariously perched right at the edge. She asked us how far she should move towards the edge – should she go so far as to kick the glass? Some yelled go further; I replied no that’s far enough. She had illustrated right from the start that her world was halved between competing forces with some wanting her to push on to danger, others wanting her to retract and play it safe. 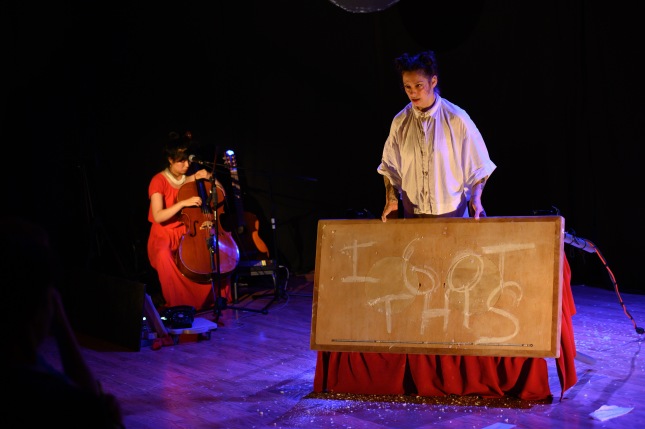 This initial invitation developed on stage into even greater levels of danger and the idea of risk taking. She proudly introduced her family; sister, father and mother, playing each as she saw them. But it wasn’t long before her childhood tale became dark and traumatic. Her father assaulted her mother and the three women decided they must flee from the abuse. Nicole imagined the moon to be a great place so she gleefully fancies she has arrived there. An old wire phone with dials rolled onto the stage, so she sat at it and called her mother. The conversation was all about how they both were feeling, with mum complaining about her 30-year nursing career and about the fact that she drank alcohol to a bit of an excess. Nicole found this all a bit upsetting and told her mother of her loneliness at being alone on the moon.

But this story wasn’t just told through straight drama! As much was expressed through; acrobatic movement and dance. Nicole eventually loosened the red drape and in front of our admiring eyes she ascended the separated drape, moving up and down at pace and creating complicated, beautiful and seemingly impossible movements. We were enthralled and just a little nervous as we followed his physical manifestation of her climb out of despair and destruction, her desire to reach the moon.

Finally, having told her story to the accompaniment of music and singing; words and movement, there came the grace of the trapeze. A show of strength and style, a fitting image to have at the heart of the story and at the heart of her world. All was brought together in the movements, the grace, the enormous strength, the endearing quality of her baring her soul as she unreservedly climbed the drape and hung on the trapeze only by her feet, just as she had to climb through life. But perhaps in the end there was the possibility of not being alone after all. Nicole picked up the phone and as she uttered the single word “Dad…” the lights went down and the show ended in darkness.
This show was spectacular, deeply emotional, wonderfully moving. It will make you laugh and cry and gasp with admiration. See it if you can! 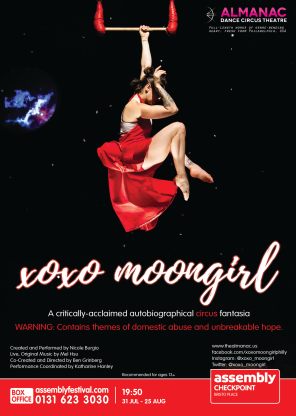