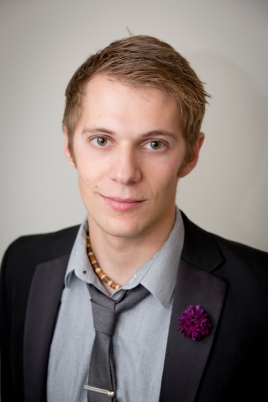 Hi Chris, where are you from?
I come from a town called Kendal in the Lake District originally but I’ve actually been living in Edinburgh for the past two years. I fell in love with the city over a decade ago when I first came to the fringe festival as a punter so it’s wonderful to now be living here and performing as part of the festival I adored so much as a young teenager.

When did you first realise you were, well, magical?
I always knew I was a good talker and I learned that I could use that to persuade and influence people. I started out doing simple bar-bets and scams to earn drinks in the pub. It wasn’t until later that I realised I could take those ideas and turn them into magic tricks.

There is a lot of showbiz front to your performances, does this come naturally?
I think so. I don’t often get nervous in front of a crowd. I suppose performing is like wearing a mask so the person they meet on stage isn’t necessarily a fully representative version of myself. The thing I find the most difficult is when I take that mask off and show the audience the real Chris that hides underneath. I think that’s a vulnerability rarely exhibited in magic shows but it’s something I’m fascinated in exploring. 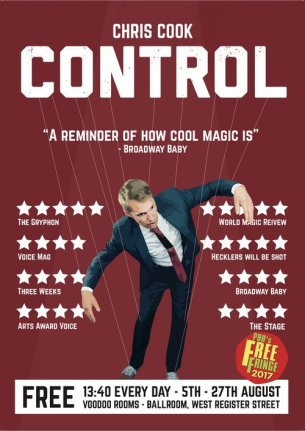 You know a good show when its happened, what are the special ingredients?
I always say that when it comes to magic, it is easy to make people laugh or applaud, it’s difficult to make people think, and it’s nearly impossible to make people feel. I strive to do all three. I know when I’ve hit it and I know when I fell short.

What does Chris Cook like to do when he’s not being, well, magical?
Well that all depends on the time of year. If it’s winter, I like to go snowboarding or travel to warmer climates in search of places to mountain bike, swim in the sea or go exploring. During summer I’m often really busy so I like to spend spare time juggling, playing guitar or walking in the hills as I feel these things help me relax and unwind. During the actual fringe festival, if I’m not performing myself I’m either frantically running around seeing other people’s shows or trying to hide from the festival by playing boardgames in cafe’s with friends. 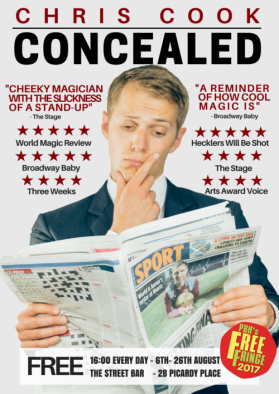 You are returning to the Fringe for another stint, can you tell us what you’re up to?
This is the first year that I’m bringing two brand new shows to the festival. The first is more of theatrical experience based around Control. I’m returning to a theme I explored two years ago with a show that was really challenging for me. I’m excited to be performing another show that is as much about the audience as the performer. It’s less about giving them a show and more about creating a community of people who go on a journey together. The audience get to determine the direction that journey takes. The second show is called Concealed and is a more intimate show. The magic happens right in front of the audiences faces and I get to tell them a bit more about my life as a juggler, street performer and magician.

You have been described as a “Cheeky magician who works the crowd with the slickness of a stand-up” : is there a comedic element to our show?
One of my biggest pet-hates in magic is that magicians often take themselves far too seriously. Magic is inherently silly so I like to embrace that and make it a funny experience. I think a lot of magicians get too caught up on being magicians and forget that they should also be actors or comedians or improvisers as well. 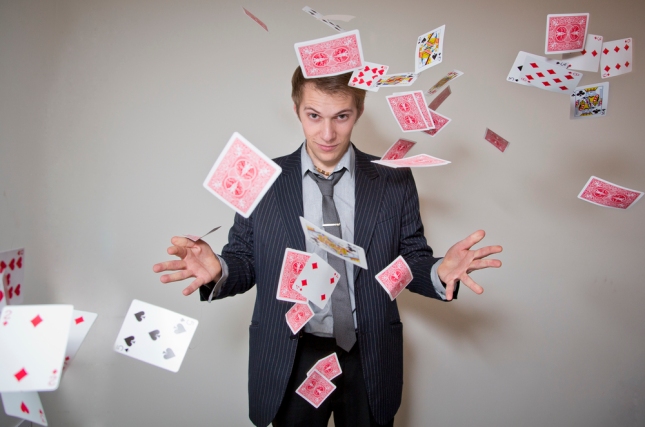 Can you describe the Fringe experience in a single sentence?
Like a Charlie Chaplin movie in fast forward, but on repeat for a month.

What does the rest of 2017 hold in store for Chris Cook?
I’ve got private and public shows booked in around the country for September. I’ve also been asked to do some shows on cruise-ships and abroad that I’m interested in giving a go (even if it’s just to get a bit more sunshine than Scotland usually gifts me with). After the fringe my head is usually buzzing with new ideas to pursue so I’m looking forward to that.

You can catch both of Chris’ shows at the Fringe

One thought on “An Interview with Chris Cook”